I have had a twitter account for a while @Rabbitmeow but didn't start using it until recently. I didn't understand how entertaining and what a wonderful resource it could be. Now I tweet everyday and I've met alot of great animals and their owners. The anipal community is huge! It has been very refreshing to meet and follow people that truly care and love animals. I enjoy waking up in the morning seeing what the rabbits, cats, dogs, and guinea pigs from all around the world are up to. It's quick and easy to use. Another aspect of twitter that I enjoy is the pictures that people share. I love seeing cute animal pictures. People post pictures of their animals in their houses, outside, cute poses, etc. It's fantastic that people share their animals lives. I have been sharing pictures of Tarin on twitter. I want to share pictures of her life and like the other anipal parents I want to share the joy that she brings to me. Twitter is also a good resource for advice on pet questions and care. With so many animal owners if you have a concern you can tweet a question and see if someone has helpful advice. If you are an animal owner/lover and you are not on twitter-do it. You will be amazed at the amount of animal lovers. Just sign up and start following animals or animal people. And if you are an animal person on twitter- thank you for sharing your love of animals.
Posted by Rabbitmeow at 10:11 PM 1 comment:

At my place of work there are geese that call this home. Around this time of year they begin to nest and start to protect their territory.
They will hiss, flap their wings, and chase you if you provoke them.

I love geese I think its cute and funny when they behave this way. If I walk by them and they begin to quietly hiss I tell them to "calm down, I'm just passing by and I'll be out of your feathers soon"

But not everyone share my same sentiments.
Many people hate the geese and find them a nuisance.

This morning a goose was found dead near one of the entrances. A large gaping hole in its chest.
It might have been an animal, I hope it was an animal because if a person killed this little goose for no reason other than just living - that is the face of true cruelty.

These animals, any animals must share the same planet with us, they ask for far less than we do. This is their home and we [as humans] can't forget that.

Although geese may annoy people sometimes - Let them be.

Posted by Rabbitmeow at 12:06 PM No comments:

I've never seen so many geese cross at the same time. CUTE!

Posted by Rabbitmeow at 12:27 PM No comments:

Rabbits are often given to kids as an Easter present. This is a mistake. I found this poem and it brought a tear to my eye. I think of all the neglected and sad rabbits out there. This doesn't only apply to rabbits but neglected pets in general. An animal is suppose to become a part of the family, live with the family, and become loved by the family.

Read this poem and keep it in your heart for all the animals that didn't live the life they were suppose to.

Easter Bunny
by Mary Brandolino
In memory of all the bunnies we couldn't save.


I remember Easter Sunday
It was colorful and fun
The new life that I'd begun
In my new cage.


I was just a little thing
When they brought me from the store
And they put me on the floor
In my cage.


They would take me out to play
Love and pet me all the time
Then at day's end I would climb
In my cage.


But as days and weeks went by
I saw less of them it seemed
Of their loving touch I dreamed
In my cage.


In the night outside their house
I felt sad and so neglected
Often scared and unprotected
In my cage.


In the dry or rainy weather
Sometimes hotter sometimes colder
I just sat there growing older
In my cage.


The cat and dog raced by me
Playing with each other only
While I sat there feeling lonely
In my cage.


Upon the fresh green grass
Children skipped and laughed all day
I could only watch them play
From my cage.


They used to take me out
And let me scamper in the sun
I no longer get to run
In my cage.


Once a cute and cuddly bunny
Like a little ball of cotton
Now I'm grown up and forgotten
In my cage.


I don't know what went wrong
At the home I did inhabit
I just grew to be a rabbit
In my cage.


But they've brought me to the pound
I was once loved and enjoyed
Now I wait to be destroyed
In my cage.

Posted by Rabbitmeow at 3:03 PM No comments:

When I noticed the link our valuable information was a link to my informational essay about rabbits.

What a delight. I am so glad that they thought my essay had valuable information that could possibly help somebody (or some bunny) if they are considering rabbit ownership.

The entire motive behind this essay was to spread awareness that education is key when adopting any animal.

Thank you Best Friends Animal Society for noticing my essay.

Tarin is especially happy too. 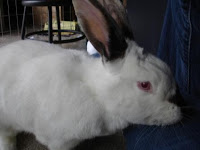 Posted by Rabbitmeow at 2:38 PM No comments:

Animals are not human.

Last night I watch the Animal Planet show Fatal Attractions. It is a show about people that decide to own pets that are exotic and dangerous; many times the animals instincts take over and a person is either hurt or dies.

Last night the show focused on tigers. Tigers are beautiful animals and I understand why a person would be drawn to this majestic creature - but we need to remember they are wild animals.
They have had shows in the past about other animals like lizards, panthars, snakes, and all sorts of amazing yet potentially dangerous animals.

I consider myself passionate about animals. I love all animals and I think each one has its own beauty (even snakes). What some people need to realize however is that we cannot anthropomorphize an animal (think it has human attributes and feelings) - because they do not. Even domestic animals that we commonly share our homes with like dogs, cats, rabbits, etc.

They can learn to live with us, accept us, and even love us but ultimatley it is from the animals point of view. We can try to understand their body language and thought patterns like how they structure their society. We need to remind ourselves that these gentle souls come from a different world than ours. They do not stress about bill, work, or taxes. Can they stress yes, but not about the same stresses - we will never fully understand.

It saddens me to watch shows like fatal attraction where people blind themselves of this reality and the animal suffers or is considered a monster.

The bottom line is all animals are in their hearts wild - and we need to repspect and honor that.

Every animal is beautiful.
Posted by Rabbitmeow at 11:26 AM No comments: 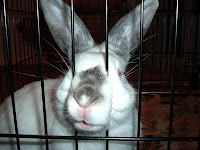